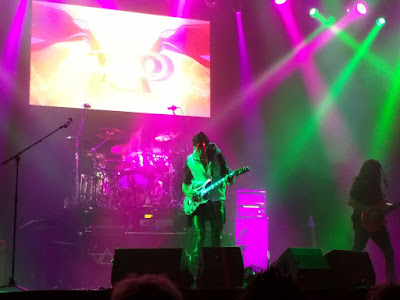 I first heard of Steve Vai in 1991, as a 12 year old just discovering music and learning guitar. A friend leant me a dodgy cassette bootleg of a Paul Gilbert clinic and, after the recording ended, at the end of one side there was a tantalising partial recording of 2 and a half tracks of the most incredible melodic guitar I'd heard to that point. It was a few months later, when I saw Steve Vai featured on the 'Guitar Legends' documentary screened to accompany the Seville '92 Expo that I finally discovered who it was and went out to buy, and be blown away by, what transpired to be the album 'Passion and Warfare'. (You need to watch this if you love guitars):

The early '90s was a different time. As a formative guitarist, I fell in love with Vai, alongside Satch, Van Halen, May, Beck and Zappa, buying every issue of Guitarist magazine. I distinctly remember a 14-hour overnight coach trip to Austria with school. Prior to the days of phones and electronics, I read and re-read an issue with Vai on the cover wearing a yellow frilly shirt, holding a beautiful white/gold Ibanez (probably a youthful, still pristine 'Evo' - Steve's main guitar for many years) and, importantly, looking cool as fuck. Even though I listened and listened to the music and have never been one to follow a band on the basis of image, there is no doubt that Steve always looked the part. He had the perfect leather-clad metal look while remaining on the right side of glam, no obvious makeup or hair do - you really did believe Vai just got out of bed looking that cool.

The influences of my guitar heroes sadly never propelled me to stardom, but I still give much of their output regular plays with Passion and Warfare itself being prime amongst them. 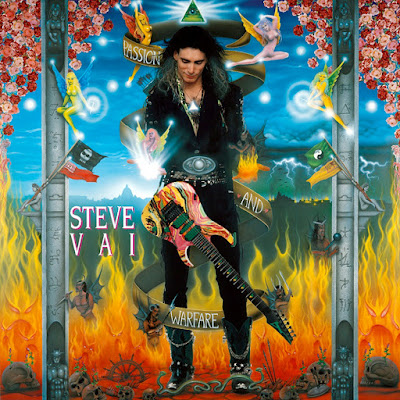 There are few albums whose covers so accurately reflect their content. All at once colourful, cool, fantastical, slightly surreal and complex. Again, I talk about image. However, it's impossible to listen to Passion and Warfare without mental images appearing. This is the sound of a grand vision which, to my impressionable teenage mind, fitted perfectly with the exploration of new ideas and feelings in my own head - a massive space and universe within the confines of your own head and bedroom.
From bombastic, anthemic opener 'Liberty' to the almost atonic and disjointed yet somehow perfectly coherent soundtrack-to-a-film-that-never-was album closer 'Love Secrets' the album itself is ridiculously diverse, with stripped back balladry ('Sisters') to metal ('Erotic Nightmares') with shades of funk, classical, jazz, musicals and avant garde thrown in. Non-standard arrangements feature aplenty and the guitar work and effects are truly experimental and groundbreaking (a word bandied about far too regularly in the intervening years). In 'The Audience Is Listening', Vai answers his old master Frank Zappa's question 'Does Humour Belong in Music' with a resounding 'yes' with a track that somehow manages to overcome it's inherently cheesy concept to still sound serious - the protagonist mentally giving a big 'fuck you' to the doubters; You can reach your dreams, folks.
Centrepiece to the album is one of the finest performance recordings there is - 'For The Love of God'. For all the vitriol that's been directed at the so-called shredders and at rock in general, I would urge anyone to give this piece a true listen to hear how themes can be developed through a track and how emotion can be captured through playing - the final flurry of notes before the final refrain still gives me goosebumps every single time, conjuring up images of a drowning person using their last strength to make for the surface before sinking back under and succumbing to whatever spiritual end awaits them.

So, how is this going to work live? 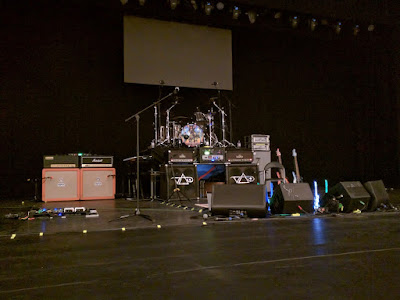 Often, when an artist announces a complete album playthrough, you have to wonder how they will pull it off. Passion and Warfare asks more than most rock albums, with its innovative use of effects and massively multi-layered studio trickery. It was, therefore, with some surprise that I settled into the red velvet seats of the London Palladium to see one of the smallest stage setups I've seen. Oddly crammed way back and into the centre was simply amps, gear and mics for the 4-piece band consisting of long time Vai musicians Dave Wiener (guitar, occasionaly keys), Phil Bynoe (bass) and Jeremy Colson (drums). The only additional accoutrement was a relatively small (for the venue) projection screen suspended above the drum riser and not, as one might have expected, a stage full of additional musicians, pyro or choirs.

So, again, how is this going to work live?

As the lights dimmed, Vai entered. Shrouded by a grey hoodie, with laser beams projecting from his eyes (no, really!) the band launched into the stomping Bad Horsie (based, of course, on a riff from the infamous guitar duel from Steve's role as the Devil's guitar slinger in Crossroads) and the Attitude Song from 1985 album Flex-Able. Fan favourites, these ensured everyone was indeed paying attention as Steve continued a mini career retrospective with renditions of more recent track Gravity Storm and Whispering a Prayer. It was here that Vai's magic started to show. Absolute mastery of the instrument was demonstrated perfectly. For some reason, I always assumed the rubbery sound of Gravity Storm was from trem dives. Live, it's clear that it's actually done by pre-bends, i.e. bending the string up before hitting it, executed perfectly to pitch every single time, with Vai's right hand staying pointedly away from the whammy bar for the whole song in case anyone should assume he was cheating.
Whispering a Prayer was another tour de force. Carrying the tune using subtle, and not so subtle, whammy bends, removal of the trem arm to use as a slide, and volume swells to change the attack of individual notes and give the piece a vocal quality; Other than Jeff Beck, there is probably no other guitarist who can make a guitar sound so alive. 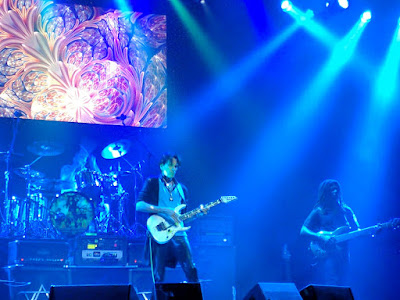 Finally, we get what we came for. Using video from Steve and Brian May playing at the aforementioned Seville EXPO, we are out of the gates with Liberty. Oddly, whether expectation or something else, it's perhaps the loosest I've ever heard Vai play live. A slight overbend here, or a hint of a bum note in the fastest of runs slip through the normally machine-accurate fingers. However, far from detracting, Steve's enjoyment in his playing is obvious. A grin accompanies the playing throughout.

The rest of the album is as expected. Perfectly executed, with the small band sounding far bigger than might be expected. It is constantly treated reverentially, and even where orchestrations are subtly altered to suit the band, the overall feel of each track is maintained perfectly. An element of humour is maintained throughout, with the only let up being 'For the Love of God', for which Vai stops and composes himself before diving in for another stellar, but movingly serious, performance - no mean feat for such an emotional track that any normal person would be expected to tire from after so many performances.

There is showboating aplenty, as expected. However, it's never done arrogantly and there's always a nod and a wink to what we all secretly know; for all the coolness of Vai, he is actually a geek of the highest order and you can just feel the excitement he must have felt when he invented some new technique we all take for granted now. Whilst many young guitarists nowadays can keep up with Vai in terms of speed, seeing just how much effort Dave Weiner (an exceptional player in his own right) has to put in to match some of the unison/harmony lines demonstrates Vai's 'different league' status, as he appears to be cruising much of the material, and also has the capacity to inject meaningful phrasing and dynamics beyond the basic notes.

The playthrough ends with 'Love Secrets' crashing out, with Steve shrugging with a laugh and a 'that's all I've got' as he acknowledges the difficulty of arranging such a complex studio piece for a live performance - something achieved impressively and admirably here. 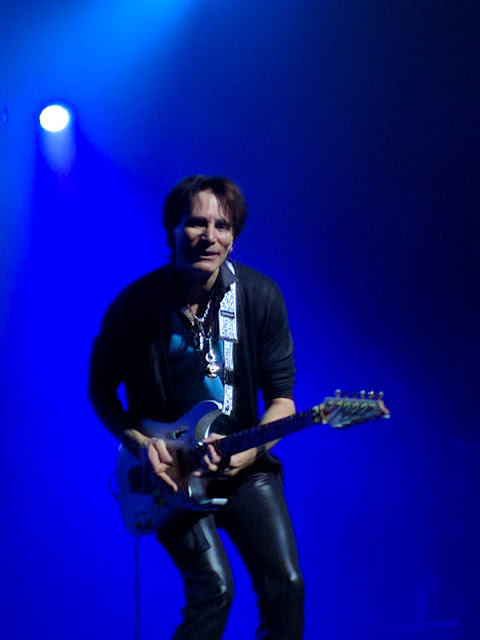 The encore opens with a tribute to early mentor and musical genius Frank Zappa with a heartfelt rendition of Stevie's Spanking, designed as a showcase for the then 20 year old Vai to showcase his talents live. This is followed by a 'Build a Song' section, where the whole band demonstrate impressive pitch recognition and musical interplay as members of the audience suggest parts which are somehow pulled together into a coherent musical statement.
The final encore is Taurus Bulba, from the Fire Garden Suite.
Even as a lifelong fan, I was blown away by tonight's performance to the point where I've been rediscovered my love for Steve Vai's work, rediscovering the lesser listened albums and reminding myself just how skilled and how inventive he really is. If the rumours of a stripped back guitar-centric album turn out to be true then there really still is a lot to come from one of music's true innovators.